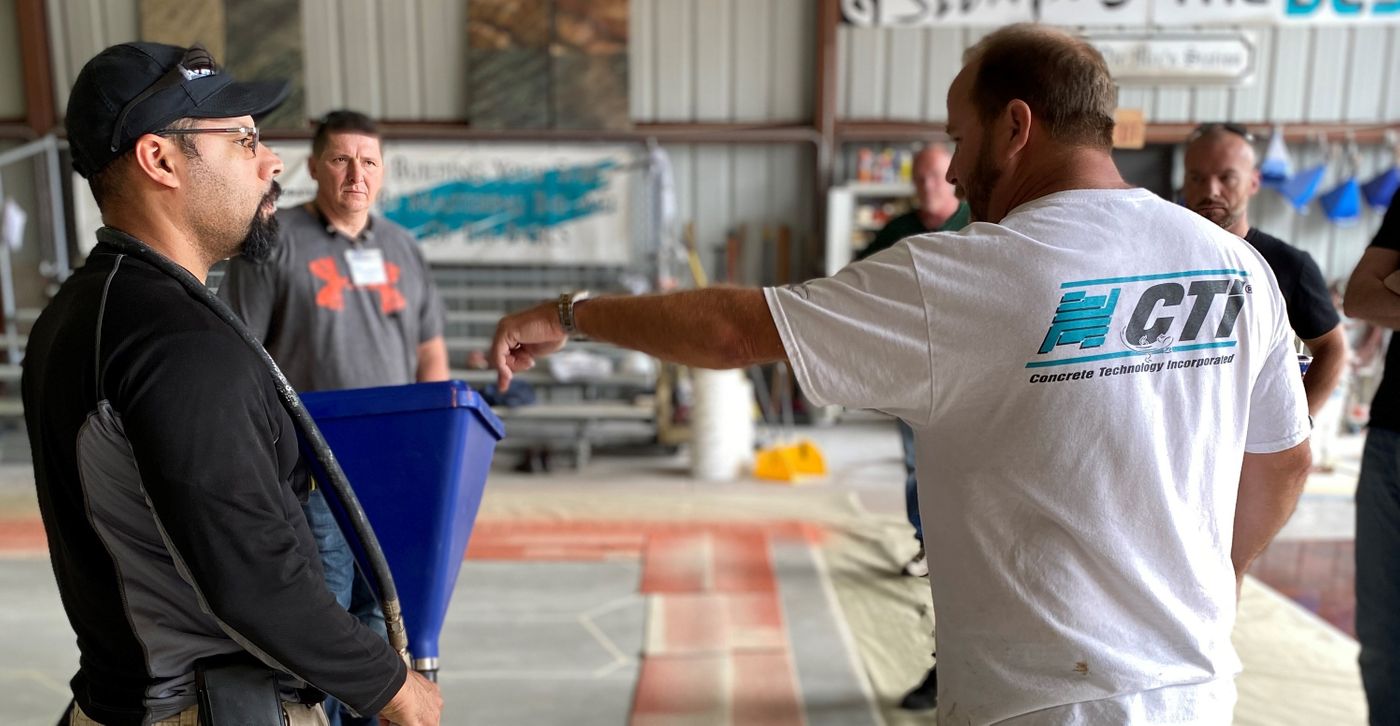 Growing Your Own Business Through CTi: Franchise Success Stories

Shooting for success in the small business world can be stressful, especially in the early years.

It takes many small business ventures up to two or three years to be profitable, and more than 80 percent of startups fail because they aren’t able to turn a profit fast enough.

That’s why franchise owners in the engineering and industrial field find CTi concrete to be such a reliable avenue. There’s little risk and a low investment cost. Turnkey packages for your own business are as low as $9,500. The acrylic concrete field is a niche industry, and because each franchise owns its own territory, there’s low competition.

But most importantly, there’s a quick return on investment—most CTi franchises see a positive cash flow within months.

The average CTi dealers collect on average $5.30 per square foot, and the average concrete driveway is 20 by 40 feet, meaning that each job typically collects around $4,240. Because the spray application of CTi concrete is so simple, the job easily is completed by two people in two days or less.

Plus CTi concrete is the definitive standard for the future of the concrete industry. It’s twice the strength of normal concrete but easier to maintain and easily can mimic nearly any style the customer desires.

In addition, CTi concrete is resistant to:

As an additional assurance to your success, when you’re a CTi franchise owner, you’re never on your own. CTi has your back with comprehensive training, around-the-clock technical service and factory support, and field-tested marketing programs.

Read on for some franchise success stories.

After four and a half years with CTi, owner Michael Travis turned Concrete Design into a million-dollar business.

“I think CTi has played a huge role in the success of my company,” Travis said. “Their support (as the company began) was unmatched.”

Travis put a great deal of research into the franchise he would open. After exploring many options, he ultimately chose CTi not only because of the reputation of the product but because he wanted a healthy working relationship with an innovative company that provides stellar support to its franchise owners.

“I wanted to really grow a business, and it was important to have a company behind me that would support that,” he said. “I was really impressed by the thoroughness of the package.”

“It made a huge difference in getting us off on the right foot,” Travis said. “Getting set up right is all about the future.”

Tampa Custom Concrete had only been in operation eight months when owner Anthony Caracappa shared his story, but business was already booming.

“The product and material is amazing,” he said. “It’s very high quality, which allows us to charge a premium dollar and, at the end of the day, to have very happy clients who are willing to pay a premium dollar for these products.”

Scott Schultz of SS Concrete Solutions in Kentucky shared a recent story in which he took a potential client on a tour to see a pool he’d installed several years prior.

“We hadn’t seen the pool in three years,” Schultz said. “And that pool deck looked like the day we put it down three years ago. The potential customer was very pleased.”

Schultz and SS Concrete Solutions have been with CTi for over six years now.

“We’ve been amazed by the products, the versatility of them, and how they can be applied to create great looks for what the customer is after,” Schultz said.

Schultz also said he was “amazed” by the support SS Solutions has received from the CTi headquarters in Florida as well as the network of fellow dealers.

“I bought into CTi because they had a product that would hold up to the environments that I face (in Texas),” said Sonny Morton of Concrete Sensations. “I love CTi because we don’t compete against each other. Rather we share support, techniques, ideas, photos and the ways to color the world one customer at a time.

“At CTi, we are a family and, as a family, we would love to welcome you.”

Start Your Own Concrete Technology Dealership

CTi has installed over 130 million square feet of acrylic cement product in its 26 years of existence and is the largest concrete technology company of its type on the planet, with 700 dealers in 23 countries. Its headquarters is located in Largo, Fla.

If you’re interested in launching a concrete franchise with an exclusive territory, don’t hesitate to request more information by calling (888) 689-9803 Monday through Friday between 8 a.m. and 4:30 p.m., or visit CTi at our website.

Alternatively, you can get started with a request for franchise consideration right away, and we’ll determine if there is a territory available and if a mutually beneficial partnership can be established.

We’re excited to join you on the next step in your small-business journey.